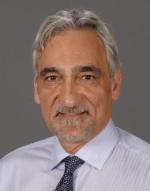 George Christou is Distinguished Professor of Chemistry at the University of Florida and the inaugural holder of the Drago Chair. He was born on the Mediterranean island of Cyprus, raised in London, England, and obtained his BSc and PhD degrees at Exeter University, UK. After faculty positions at Imperial College, London, and Indiana University, Bloomington, he joined UF in 2001. His research is in transition metal chemistry and its applications to bioinorganic chemistry, supramolecular chemistry and nanoscale magnetic materials. He was a pioneer of the new magnetic phenomenon of single-molecule magnetism, the ability of individual molecules to function as nanoscale magnets, and has since helped it mature into a broad, deep-rooted area of modern chemistry. His compounds, and his ability to modify and thus optimize them for particular studies, have led to discovery of several quantum physics phenomena in magnetism that were not attainable using traditional magnetic nanoparticles, and which are important to new 21st century technologies. He has published over 560 peer-reviewed publications, of which 70 are in the physics literature, and has been selected to the Highly Cited Researchers 2014 and 2015 lists. He is Editor of the journal Polyhedron and an Honorary Professor of the London Centre for Nanotechnology and University College, London.