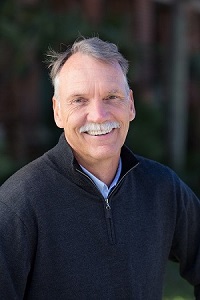 Professor Kevin S. Jones is currently a Distinguished Professor and the Fredrick N. Rhines Professor of Materials Science and Engineering at the University of Florida.  For 35 years his research has focused on understanding the defects introduced during the doping of semiconductors and how they effect the performance of the microelectronic and optoelectronic devices being fabricated. Semiconductors have enabled the revolution in information technology and are at the heart of everything from computers to the internet. Dr. Jones has published over 400 refereed articles and given nearly 300 international talks, most focusing on characterization of materials, specifically ion implantation damage in semiconductors. For 8 years from 2002 to 2010 he was Chair of the MSE Department at the University of Florida.  Under his leadership the UF department grew to be the 2nd largest MSE department in the US with nearly 450 students including 180 PhD students and achieved its highest US News and World Report ranking as the 6th best MSE program (public and private) in the US tied with U.C. Berkeley.  He is Chairman of the International Committee on Ion Implantation Technology and is founder and co-Director of an SWAMP (Software and Analysis of Advanced Materials Processing) Center.  He has graduated 42 PhD students.  In 2009 he was elected as a fellow of ASM International, the Materials Information Society and in 2010 he was elected a fellow of IEEE and in 2012 he was named a fellow of the Materials Research Society.   In 2016 he was promoted to Distinguished Professor and in 2018 he was named the UF Teacher/Scholar of the year and elected to the Academy of Distinguished Teaching Scholars.  Recently the North America Materials Educators gave him the 2018 Award for Outstanding Contributions to Materials Education.  This award was given for developing his development of a freshman course with faculty from Humanities, Sociology, Anthropology and History entitled  “The Impact of Materials on Society”.  This course has been so successful that it has resulted in a tripling of the undergraduate enrollment in Materials Science and Engineering making the MSE department at UF one of the largest in the country.  An open source text book was written for the class and all the lectures, notes, demonstrations etc. have been put on line for other schools to download free of charge.  NSF, MRS and DoD have all supported the dissemination of this course around the world and currently there are over 40 universities who have expressed interest or are offering the class around the US, Central and South America, Southern Africa and Europe. Further dissemination in Northern Africa is planned for next year.  An article about this class appeared in Time Magazine and was downloaded over 95,000 times. He was recently awarded the 2018 Award for Outstanding Contributions to Materials Education by the North America Materials Educators Association (NAMES) for the development of the IMOS course.